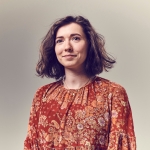 Ancient Iraq: new discoveries is a touring exhibition from The British Museum, featuring over 80 objects from their collection. Cafeteria were delighted to be commissioned by the museum to design the visual identity, marketing, interpretation, and layouts for each gallery space as the exhibition tours the UK.

New discoveries focuses on two important archaeological sites in Iraq today — Tello and Qalatga Darband; sites which have unearthed treasures from the earliest Sumerian cities, as well as objects that have helped chart the rise and fall of Greek, Parthian and Roman empires at their eastern frontier. The exhibition also highlights The British Museum’s, ‘Iraq Emergency Heritage Management Training Scheme’, which supports archaeologists working in the field against a backdrop of prolonged conflict and disruption in the region. The exhibition was as much about looking forward to a better future as it was looking back on incredible ancient achievements.

The broad themes of the exhibition needed to appeal to a wide audience and demanded a unifying approach to the design. To do this we showcased featured objects through vibrant and stylised illustrations complemented by characterful typography. Together with a colour palette drawn from the contrasting landscape, the resulting identity conveys themes of ancient ingenuity, changing civilisations and timeless storytelling.

This was an exciting project, with real depth. We led planning the design, display and delivery of the exhibition from start to finish and  partnered with Freelance Curator, Theresa Whittaker to devise the floor plans and curate case displays. We also used 3D modelling software, SketchUp to provide interactive scale models of each space.

Ancient Iraq: new discoveries is part of the museums Other World/Ancient Worlds season. You can read more about our work for Other Worlds: The Art of Atomhawk here.

The exhibition opened at the Great North Museum: Hancock in Newcastle on March 6, though due to current circumstances, it is temporarily closed. We hope the museum will be open again soon and visitors can enjoy the show once again. It’s also due to tour to the Djanogly Gallery in Nottingham later this year, so watch this space…

Image Credit: The Trustees of the British Museum. Photos by Colin Davison